The Truth about Spaying and Neutering your Pets

​Four million cats and dogs--about one in every eight seconds--are put down in U.S. Shelters each year.  Many cats and dogs who die as a result of pet overpopulation could have made wonderful pets.  ​A solution is possible and starts with each of us taking one small step;

getting our own pets spayed and neutered.

But just in case you need more information before making this important decision,

here is the truth behind some commonly spread myths about spaying and neutering.

MYTH:  It's better to have one litter before spaying a female pet.

MYTH:   I want my dog to be protective.

FACT:     It's a dog's natural instinct to protect home and family.  A dog's personality is formed

more by genetics and environment than by sex hormones.

MYTH:   I don't want my male dog or cat to feel like less of a male.

FACT:     Pets don't have any concept of sexual identity or ego.  Neutering will not change a pet's

basic personality.   He doesn't suffer any kind of emotional reaction or identity crisis

MYTH:   My pet will get fat and lazy.

FACT:     The truth is that most pets get fat and lazy because their owners feed them too much

and don't give them enough exercise.

​MYTH:   It's expensive to have my pet spayed or neutered.

FACT:      Most regions of the U.S. have at least one clinic within driving distance that charges

(This final MYTH/FACT is why our community SNIP Program is so important.)

​The above was taken, in part, from the  HSUS website.​ 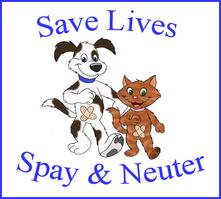